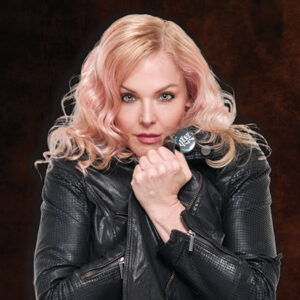 Storm Large: musician, actor, playwright, author, awesome. She shot to national prominence in 2006 as a finalist on the CBS show Rock Star: Supernova, where despite having been eliminated in the week before the finale, Storm built a fan base that follows her around the world.

Storm made her debut as guest vocalist with the band Pink Martini in April 2011, singing four sold-out concerts with the National Symphony Orchestra at the Kennedy Center in Washington, DC. Recent engagements include debuts with the Philly Pops, members of the Chicago Symphony Orchestra, and the Seattle Symphony, as well as return engagements with the Houston, Detroit, Toronto, and BBC Symphonies; the New York Pops; and the Louisville Orchestra, with whom she recorded the 2017 album All In. In the fall of 2014, Storm & Le Bonheur released a record designed to capture their sublime and subversive interpretations of the American Songbook. Entitled simply Le Bonheur, the recording is a collection of tortured and titillating love songs: beautiful, familiar, yet twisted … much like the lady herself.

Some material may not be suitable for children under 17.